Delighted to report the news that Crossing the Borders of Time has now been published in both German and French translations. It seems particularly meaningful that readers in those two countries where so much of the story actually unfolded can read it in their native languages. It was Leslie’s first trip to Germany with her mother 1989 that sparked her research into Janine’s remarkable life.

In Germany, the historic Freiburg-based publisher Herder Verlag gave the book the romantic title Liebe ist stärker als die Zeit (Love Is Stronger Than Time).  The translator, Claus Schneggenburger, is a former journalist who wanted to share his strong appreciation of the book with German readers.

The French publisher, Presses de la Cité, chose a title like the German one, Un amour plus fort que le temps (A Love Stronger Than Time).  Beside the regular edition, the book is available in French in a pocket edition and an abridged version.  The French and German books include the many photographs, maps, and documents included in the original American edition, published by Other Press. 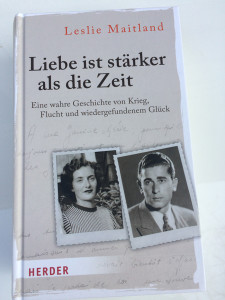