Crossing the Borders of Time

Crossing the Borders of Time, in hardcover: 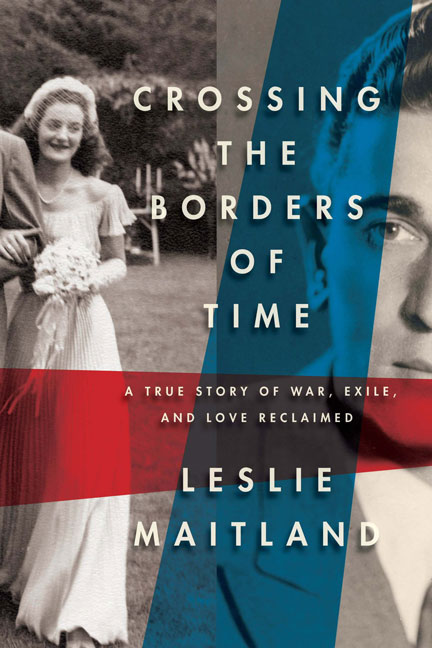 “…the listener may forget this is a work of nonfiction—so engrossing is its story and so vividly is it told.”


Crossing the Borders of Time

A True Story of War, Exile, and Love Reclaimed

On a pier in Marseille in 1942, with desperate refugees pressing to board one of the last ships to escape France before the Nazis choked off its ports, an eighteen-year-old German Jewish girl was pried from the arms of the Catholic Frenchman she loved and promised to marry. As the Lipari carried Janine and her family to Casablanca on the ﬁrst leg of a perilous journey to safety in Cuba, she would read through her tears the farewell letter that Roland had slipped in her pocket: “Whatever the length of our separation, our love will survive it, because it depends on us alone. I give you my vow that whatever the time we must wait, you will be my wife. Never forget, never doubt.”

More about the Book

Excerpt from Crossing the Borders of Time

During the fall that my father was dying, I went back to Europe and found myself seeking my mother’s lost love. I say I went back almost as if the world my mother had fled and the dream she abandoned had also been mine, because I had grown to share the myth of her life.  Perhaps it is common for children whose parents survived the Nazi regime to identify with them, to feel a duty to make their lives better. As my mother’s handmaiden and avid disciple in an oral tradition, I felt possessed by a history never my own. Still, not as yoked as she was to life’s compromises, I would prove more prepared to retrace the past and use it to forge a new future for her.

Time was running out on the present, and while my father grew weak in a lonely cave of silent bravado, it pained me to realize he would not even leave us the words that we needed.  No deathbed regrets, explanations, or tears. An emotional bandit, he would soon slip away under shadow of night, wearing his boots and his mask.

When work as a journalist compelled me to leave New York for a week that October, I was anguished to lose precious time at Dad’s side. Yet  how fast he would fade I failed to imagine.  Nor could I foresee the course of my journey: that an impetuous detour to France from reporting in Germany would take me in search of Roland Arcieri – the man my mother had loved and lost and mourned all her life. Dreading my father’s imminent death and the void he would leave, I took a blind leap of faith into the past, dragging my mother behind me.

This is how one Sunday morning in 1990 I came to be visiting Mulhouse, a provincial French city just twelve miles from Germany’s Rhine River border. With cousins in town, I had visited Mulhouse twice years before. But on this crisp autumn day I found myself drawn toward a new destination: a 14-story, concrete and blue brick building whose boxy design represented what passed too often for modern in Europe. Although there was nothing about this unexceptional structure on a street densely shaded by chestnut trees to attract an American tourist, I instantly sensed that this was the place I needed to find. I stood at the spot – the X on a map to a treasure buried by time – torn by contradictory feelings. I ran a very real risk of discovering something better left hidden, yet I could not understand or forgive my failure to look here before.

An ache of remorse for all the lost years mingled with nervous excitement. Just up the stairs, I would finally learn what I had always wanted to know. Who was Roland? Where was Roland? What had happened to him in the near 50 years since the cruelties of war had stolen the girl he wanted to marry? I yearned to find my mother’s grand passion. Love for the dark-eyed Frenchman, whose picture she always kept tucked in her wallet, continued to pulse in her memory, the heartbeat that kept her alive. Now, at long last, I had tracked down his sister, who lived in this building, and I’d called her the previous evening.